The evolution of modularisation and partitioning in shipbuilding

The introduction of prefabrication, modularisation and partitioning in shipbuilding goes hand in hand with the evolution of ship size and technology in general. Some big shipyards, with their clusters of specialist companies, have in cooperation with shipowners and other stakeholders gradually learnt to build ever bigger and more complex cruise ships. Among a number of other important factors making this evolution possible, prefabrication and modularization have played an important role.

The design and engineering process and engineering itself have undergone dramatic changes over recent decades. Engineering offices have adapted to the evolution of modularisation and, in many instances, have been facilitators in this change process.

Despite being somewhat different in nature, prefabrication, modularisation and partitioning are driven by the same factors. The three main drivers behind the modularisation evolution are the need to decrease construction hours, the need to shorten delivery times while maintaining high quality, and the growing size of ships.

In the rest of this article, I discuss the increased role of prefabrication, modularization and partitioning in the context of these drivers and the impact of engineering and its role in these developments.

The development has been evolutionary: processes adopted at certain stages have remained and have been refined in subsequent stages. 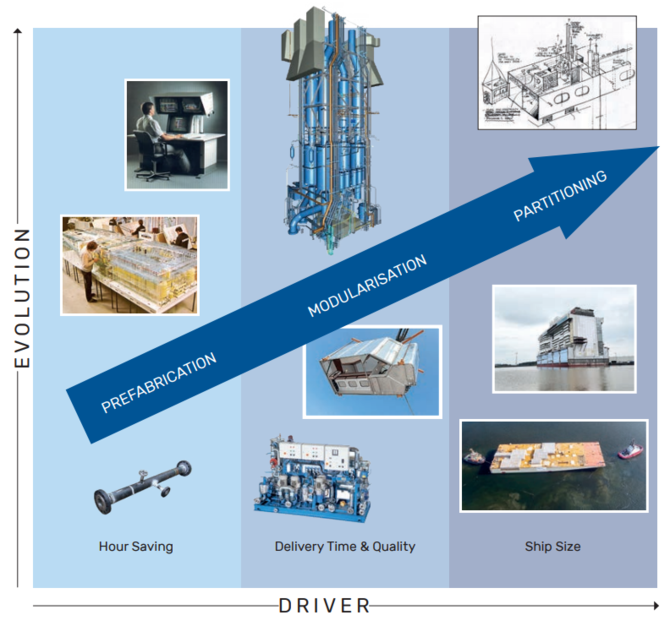 Perhaps the most significant benefits of prefabrication technology are gained from moving a major part of the work from the ship into workshops, thereby reducing the number of inefficient hours spent on board vessels during construction.

In the early days, prefabrication was limited to various types of equipment and outfitting elements, such as machinery, deck equipment, furniture, hatches and doors. Most of these elements were manufactured in workshops inside the yard.

The use of prefabrication accelerated as the need for efficiency grew. Hull assembly based on building blocks became commonplace while prefabricated pipes and later, pipe packages and system-based modules, were introduced for machinery.

To answer the need for prefabrication in the 70s, Elomatic started to develop CADMATIC software. Based on plastic 3D models and with the help of the software, manufacturing documentation needed for pipe prefabrication was semi-automatically produced in a fraction of the time required for manual drafting.

The benefits of prefabricating are obvious – increased productivity and quality due to better working conditions in the workshop and faster turnaround with more flexibility due to parallel production, shorter installation times and the possibility to subcontract. 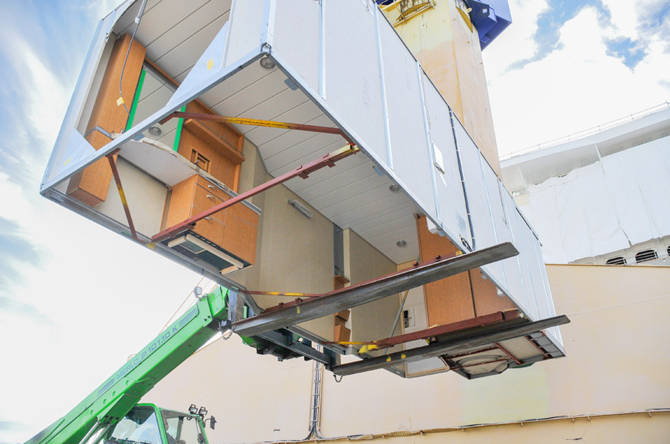 The amount and complexity of prefabricated modules gradually increased as the demand for shorter delivery times and quality grew. Working hours were saved as an increasing share of outfitting was prefabricated and installed at the most favourable stage of the shipbuilding process.

Modularisation became commonplace and a variety of different modules were preassembled before installation on board. Pipes were bunched together to form pipe packages, complex ceiling domes for public spaces were prefabricated as modules, and functional machinery units were developed, assembled and pre-tested. Penetrations were also combined as group penetrations, interior entities such as waiter stations were built in workshops, and window frame panels were standardized and prefabricated.

In refurbishment projects, the use of prefabricated modules has been maximized to enable extremely short turnaround times for on-board work.

Auramarine, based in Littoinen in the Southwest of Finland, is one of the pioneer suppliers of functional modules. The company is specialised in fuel supply systems and supplies a comprehensive selection of standardised and tailor-made units.

Today, it would not be possible to build a big cruise ship within the available timeframe and with the required quality without industrially produced prefabricated cabins. Piikkio Works Oy, a subsidiary of Meyer Turku Oy, is a pioneer supplier of modular cabins for cruise ships. It has delivered more than 130,000 cabins and bathroom units during its 30-year history. The production is based on industrial serial production, both at the company’s panel production facility in Vilnius, Lithuania, and at the assembly factory in Piikkiö, Finland. This manufacturing process ensures the highest quality standards throughout.

Rather big subparts of ships, such as fully outfitted AC-rooms, are prefabricated and pre-assembled in yard workshops. Others such as funnel casings and drop-in elevator trunks have been delivered by subcontractors.

"Prefabrication and modularisation have played an important role in the construction of increasingly large and complex cruise ships.

Modularisation has delivered immense efficiency increases in addition to the savings in calendar time. The shortened delivery times and increased prefabrication have had a considerable impact on the engineering process. To allow time for prefabrication, engineering work has to be finalised earlier and prefabrication requires engineering that is more exact. 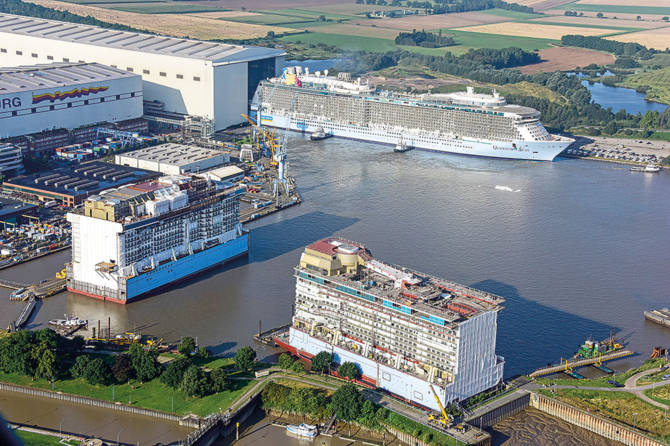 The need for partitioning has grown alongside the increase in cruise ship size; it has become obvious that the “elephant must be eaten one bite at a time”.

The scale factor has an impact on the design, construction and the management of large projects. Extrapolating from previous experience can be used for a small increase in size. A larger increase in size, however, emphasises the scale factor and requires new solutions. The large number of components, people and organisations involved increase the complexity and amount of questions that need to be answered. The growth of complexity is exponential and no longer linear.

This has led the way to the next stage in the evolution of modularisation, namely partitioning. In order to cope with a gigantic task, we must split it into smaller subtasks. These subtasks involve planning, purchasing, engineering, logistics, and construction as well as commissioning. The target is to split the project into parts that have as small an impact on each other as possible. This allows the tasks to be handled in parallel, with a minimum need for interaction between the parts.

In order to achieve this, the ship itself must be designed to facilitate the project split. Partitioning possibilities must be considered when creating the overall layout of the ship and when designing systems. The forming of the building strategy must progress hand in hand with the overall design of the ship.

The basic design phase is crucial in maximizing the degree of modularisation and enabling project partitioning. The design should take into account the possibility of splitting the project into smaller parts with as little interaction as possible, both from a system and from a structural point of view. The parts should be as autonomous as possible to make partial system testing and commissioning possible.

At Elomatic, we have actively taken part in the development of new ideas and processes to cope with the growing demand for new assembly methods. CADMATIC has also developed functionalities to manage the new requirements. Filtered replication can, for example, be used to control what parts of the product model are visible for a particular subcontractor. This makes project partitioning possible as the yard can control access to the product model without jeopardizing the vital IPR assets of the yard.

Meyer group has adopted a strategy to prefabricate massive Floating Engine Room Units (FERU) in a dedicated facility at Meyer´s Neptun Werft in Germany. Pre-outfitted FERUs are assembled for its yards in Papenburg, Germany and Turku, Finland. This is an excellent example of partitioning were one specialized site increases efficiency through series benefits and simultaneously shifts working hours away from assembly yards, thereby facilitating shorter delivery times and distributed manufacturing.