CADMATIC Web API brings all project related data (PDM/PLM/ERP) closer to CADMATIC designers and thus ensures the highest possible design quality and that data is easy to find. In some cases, it may also make it easier to estimate the costs of changes.

CADMATIC Web API is a REST API that enables users to create interfaces from third-party systems, for example, ERP or PLM/PDM, to and from CADMATIC products, such as CADMATIC Outfitting and 3D Plant Design. CADMATIC Web API is used by a project-specific integration software client that can make simple HTTP requests over the network.

Examples of use cases for the integration:

Before the 3D model is available or design work has started, information about components can be available in the PLM system, as the PLM process can manage the purchasing of the components. When the manufacturer provides component drawings or a 3D model, the PLM process can create a notification that this needs to be created in the CADMATIC library. Creating components in the CADMATIC library is a manual functionality to control the correct connections, limit the imported model size and guarantee the quality of design.

When a component has been imported or modeled in the CADMATIC COS library or project database, the COS ID should be linked to the PLM node where the component requirement originated. This way, the library object can be found in later projects as well, in case the same part is needed. With the same ID, component attributes like material number, weight, and manufacturer information can also be updated if needed via the CADMATIC part attribute Web API functions. 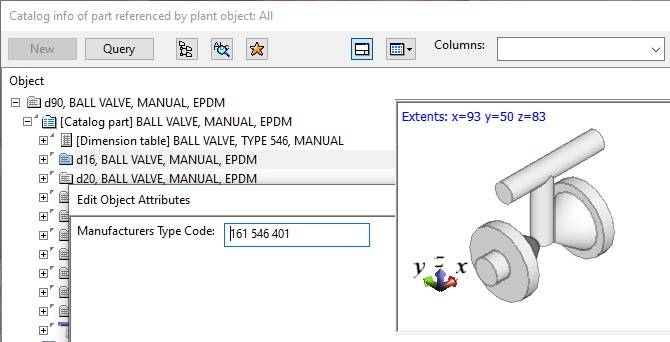 If the component model changes during the design process with a new revision, we suggest that a Cadmatic Administrator manages the change. The process can be managed in the PLM, but the actual change is done manually to ensure that the models are handled correctly on a case-by-case basis.

The Product Breakdown Structure (PBS) is usually created in the PLM. In shipbuilding, this structure can be based, for example, on SFI group systems, or other classification rules. Sometimes it reflects the construction sequence or building standard rules.

In the plant sector, a standard typically defines the naming of tags/position IDs. The naming rules form the plant hierarchy and might provide process locations for each part.

The CADMATIC system structure can be based on the product breakdown structure or plant structure. CADMATIC systems have a similar logic to 3D modelling layers that define the allocation of objects to a group. Systems and their attributes can be queried via the CADMATIC Web API. The creation and updating of system lists need to be done manually in CADMATIC.

CADMATIC designers create the space reservation model of a ship. The vital part of the design work is placing parts like pumps and valves in the 3D model and assigning the correct position IDs. The position ID should already be assigned in the PLM PBS. The CADMATIC PLM integration is at the level of 3D model objects with a position IDs. For example, if the PLM recognizes the need in the project for a generator that has a position ID of “456.001”, the PBS can set the system to be e.g. “456_Generators” and additional attributes related to this such as purchasing status can be “ordered” or a hyperlink created to the PLM. This information can be created for the use of the CADMATIC designers via CADMATIC Web API functions.

In CADMATIC, this is done by creating external data management objects (EDM) in CADMATIC COS. When designers begin placing the generators, they can select the desired position IDs from the list. After this, they can select the part from the CADMATIC library, or if it already is linked to the ID described in case 1, the selection is automatically made for the user. Attributes can also be updated later.

Change management regarding single documents or their objects like piping should be managed in the PLM system. The designer who is responsible in each design phase needs to check the data from the PLM system.

3. Managing documents and metadata with PLM system or with CADMATIC applications

The need for creating design documents, purchasing, hard points, deadlines and the latest revisions can be handled in the PLM system, while the CADMATIC design software produces the documents. If the PLM system contains the document name and metadata and other attributes, they can be utilized directly in CADMATIC. 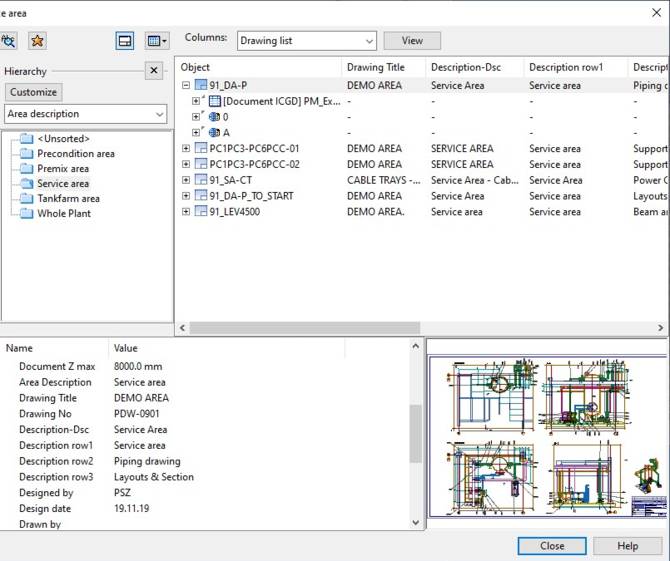 With the customization, it is possible to define that the document publication includes more than just a DWG version. Additional data can include a BOM list and an eBrowser model of the document content group. These can be included as released data in the PLM system.

The document DWG publication is automatically fetched to CADMATIC eShare and translated into a PDF with links. In eShare, the document can be viewed and contains automatic linking to the eShare 3D model. It needs to be noted that eShare always represents the latest data; it only contains the latest document publication and the 3D model represents the model that is currently being designed. eShare is a powerful tool for project managers that handle project work. An eBrowser model containing only selected objects from the document revision time point could work as acceptance or hard point for status freezes.

eShare, CADMATIC P&I and the 3D model are uniquely integrated. eShare is a CADMATIC 3D model viewing tool that can be integrated with multiple data sources such as PLM software. It combines a very large-scale 3D model in a unique way: the whole project, including outfitting parts. It is very easy to use and move in this model. eShare is useful for a wide a range of persons, not only 3D designers.

Status data that a CADMATIC designer might need during project work can be linked back via eShare to individual objects in CADMATIC. eGo is a tablet version of eShare that can be utilized on site. This use case is valid if the PLM software is not desired or available on site. The head of project installations can make a note in eShare each time something has been installed. If the CADMATIC designers get the feedback from the site via eShare, they can directly view the updated data. In CADMATIC P&I, the eShare status of objects with Position IDs can be viewed in different colors. This way, the P&I designer can get instant feedback on his/her diagram about what the situation is in the field, whether changes can be made and what it would require. eShare supports only one version of the 3D model and it is from the same time point including all the objects from the CADMATIC model.

If PLM data is needed as the source of status information, the attributes of the linked CADMATIC 3D model objects can be updated as was done in the “management of project breakdown structure” use case or linked back to CADMATIC via the eShare attributes.

In some PLM software use cases, the real 3D model exports and imports from the different 3D design software programs need to be stored and the 3D model files need to be included in a universal file format like IFC directly in the PLM. The reason for this could be the need to store e.g. certain system parts from each finished project in the PLM so that they can be compared and scrolled easily after the real projects have ended and before new similar projects start.

The CADMATIC Web API supports selecting a set of 3D model objects and exporting them in different 3D formats like IFC and JT.

Multiple other 3D formats can be downloaded manually to CADMATIC projects. Some integrations are supported for out-of-the-box use, for example, the NAPA-CADMATIC integration. The imports are typically interior or outfitting structural entities like special deck outfitting structures, windows (in shipbuilding) or building structures (in 3D plants). The PLM software can manage how these imports need to be included in CADMATIC Plant Modeller and will be a part of the exported eBrowser of eShare models and viewed together with the whole model. The imports can have a set of desired attributes included so that vital data or links are delivered.