“During the installation of the new heat pump, eShare has helped us to avoid unexpected collisions.” – Mikko Kaartinen, Senior Project Manager

Katri Vala in Helsinki, Finland is the world's largest heating and cooling plant that produces district heating and cooling from treated wastewater. In July 2020, Helen Ltd completed the extensive overhaul of the entire underground wastewater treatment system and is currently constructing a sixth heat pump at the facility. The upgrade will add 2,000 m3/h to the current wastewater treatment capacity. CADMATIC eShare was implemented by Helen in June 2020 to facilitate the integration of laser-scanned point clouds with design models in order to ease installation and reduce clashes with existing processes.

Carbon-neutral heating in Helsinki during the summer months

The new heat pump will bring the number of heat pumps at the facility to six and forms part of an ambitious series of five revamp projects that stretch to the spring of 2023. It includes the construction of a seventh heat pump that will be the largest of its kind in the world, an investment that will allow carbon-neutral heating in Helsinki during the summer months. Helen aims to achieve carbon-neutral energy production by 2035.

Helen Ltd Senior Project Manager Mikko Kaartinen says eShare has been a particularly important tool to provide early warnings of any possible collisions between the designs and the existing process.

Katri Vala produces heating and cooling year-round and the idea was to keep the plant operational during the heat pump project. One of the greatest challenges is that the underground surfaces of the excavated cave are not flat as depicted in designs and can, in fact, differ significantly from the original excavation model and theoretical surfaces. For this reason, the entire heating and cooling plant was laser-scanned already in 2019.

The integration between the laser-scanned materials and design models was not available during the wastewater treatment upgrade project. According to Mikko, this was one of the main reasons eShare was taken into use for the subsequent heat pump project.

“Unfortunately, we did not have eShare in use at the start of the wastewater system revamp project, so we had some collisions between new piping and steel structure designs with underground surfaces and existing structures, which created extra work on site. During the installation of the new heat pump, eShare has helped us to avoid these unexpected collisions,” says Mikko.

The clash between modelled reinforced plastic piping and an existing ventilation duct in CADMATIC eShare.

Helen employees and subcontractors have used eShare to support installation work. They can view the laser-scanned point clouds in photorealistic views alongside the piping and steel structure design models.

Different 3D models can also be combined in eShare and the distances between point clouds and 3D model objects can be accurately measured.

“In eShare, you can see the exact location of a new pipe or steel beam. It has also eased the installation of wall and ceiling supports and getting an understanding of the space. eShare has been a particularly important tool to provide early warnings of any possible collisions between the designs and the existing process,” Mikko sums up the benefits of eShare.

See more images below from the Katri Vala project of 3D model and laser-scanned point cloud integrations in CADMATIC eShare. 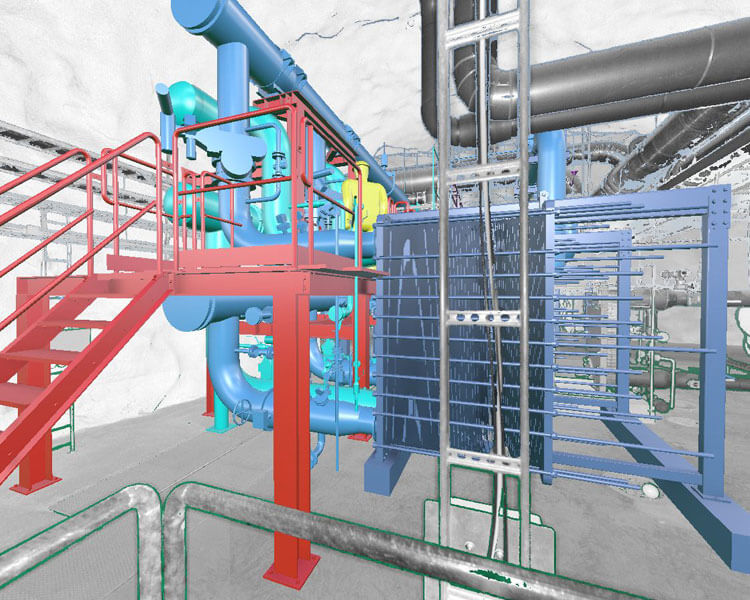 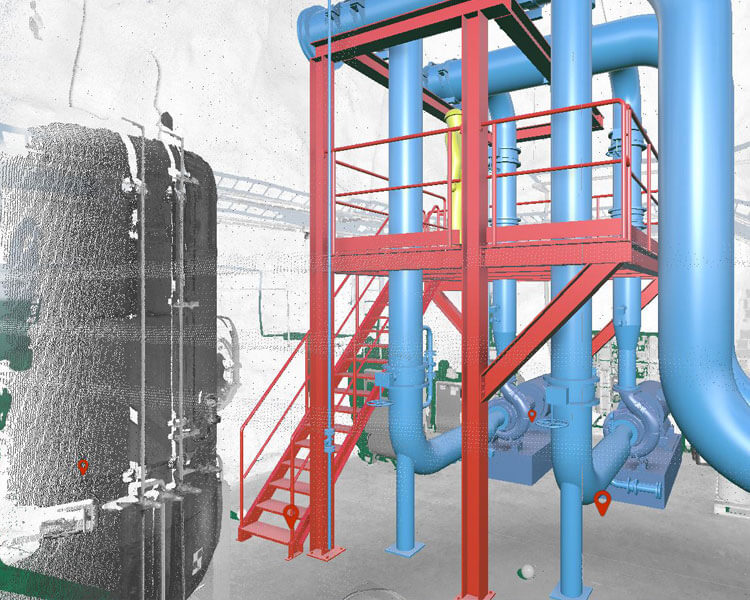 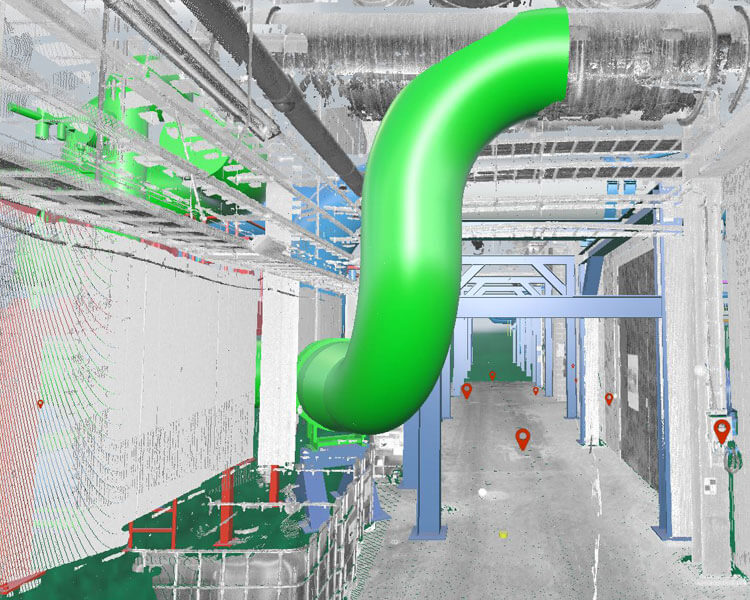 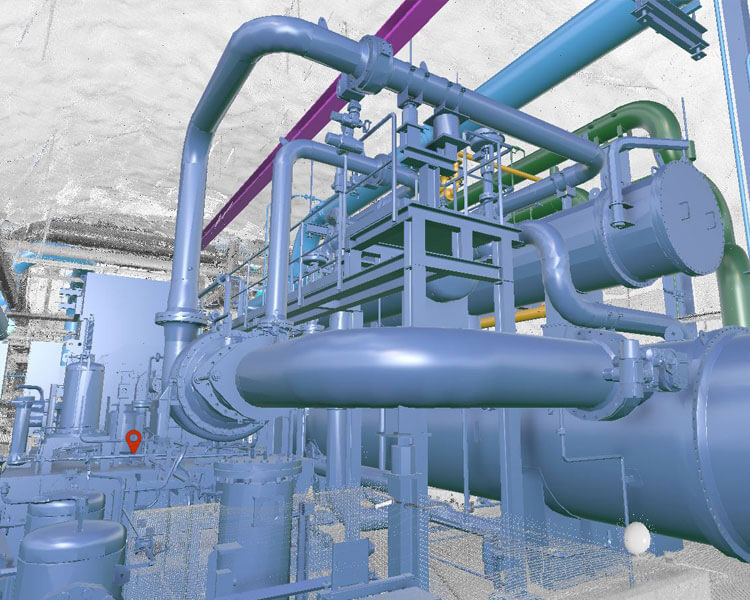 The heat pump design model in an existing space in CADMATIC eShare. 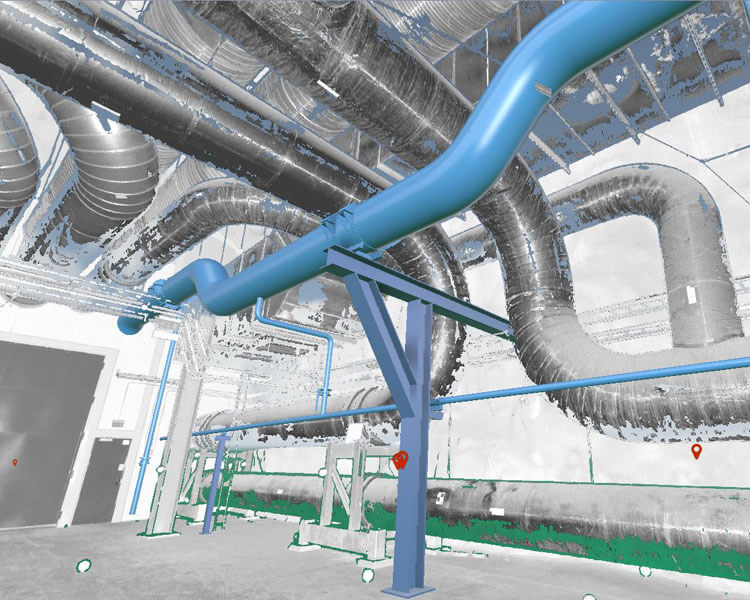 See our dedicated web page for more information about Cadmatic'S digital twin platform eShare and how it helps to solve practical challenges in process industry projects. See how eShare fits in with the Cadmatic vision for data-driven engineering and construction.