Why use fuel when there is electricity?

Why use fuel when we have electricity?” is a question one hears from time to time. It is mostly asked humorously, with several variants doing the rounds: “fuel” can be replaced with “coal”, “nuclear” and “gas”, or basically any other form of energy generation. Today, this is as relevant as ever, especially in the euphoria surrounding battery utilisation in different forms of transportation.

It is often punted as a silver bullet in the fight against air pollution and global warming. Simultaneously, internal combustion engines have gained a bad reputation, without regard to where they are used, with what fuel, or what combustion process is involved. In this article, I discuss some of the pros and cons of battery power and combustion engines.

In Europe, in particular, several high profile politicians and cities are planning to limit the use of diesel engines. Public discussions have not delved into what exactly the extent of the limitations would be. It is, for example, not clear whether such limitations would cover both Otto and diesel combustion processes, and whether the focus would be the burning process or the fuel type used? It is, furthermore, unclear how fuels like methanol, LPG or LNG/NG will be affected.

The different types of emissions deserve attention first. At a high level, emissions can be split into two categories: air pollution that is harmful to human health in the form of different particles, and greenhouse gases that have an effect on global warming. The former will primarily have a local effect (i.e. the harmful effects are felt in the vicinity of the emission source) while the latter has a global impact (harmful globally regardless of the location of the source)

The emission impact of batteries

With regards environmental impact, the unquestionable strength of batteries is the total elimination of local air pollution, e.g. in the form of PM, NOx and SOx. This is particularly important for activities in the vicinity of humans, such as cars in a city centre, or a ship in a harbour or close to shore. However, the relevance of such emissions or the lack thereof, diminishes while operating in less densely populated areas such as highways, the countryside, or the extreme case of the middle of the ocean. It should be remembered, however, that batteries are by no means a primary fuel. They merely store energy, which must be produced with some kind of fuel. At this original source of energy generation, both air pollutants and greenhouse gases will be produced. The fact that the energy generation occurs in less populated areas than city centers or harbours, as indicated earlier, makes air pollution emissions less significant.

If battery applications are chosen carefully, the environmental and economic benefits are undeniable.

For emissions with a global warming potential, such as CO₂, the issue is more complex. It does not matter where CO₂ emissions are produced; they are equally harmful regardless of the location of the source. The global warming potential is entirely dependent on the energy mix in the grid, which again is different from country to country. Figure 1 indicates the amount of CO₂ per kW/h when electricity reaches the main switchboard of a ship as a function of the original energy source. The CO₂ impact is clearly better for electricity from the national grid in Finland and Norway, while for Germany and US the outcome is almost equal and dependent on the fuel type used on board the vessel. For China and the World average, the CO₂ impact of electricity from the national grid is higher than electricity produced on board a vessel with a modern, mid-size, medium-speed engine on a high and stable load. 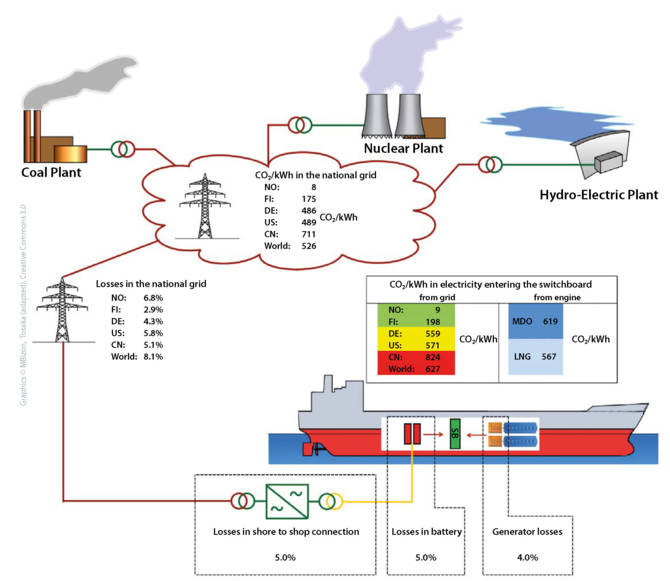 An additional disadvantage of batteries is that their manufacturing is not particularly environmentally friendly; as the required minerals are not found isolated in nature and mostly only in small concentrations. Furthermore, the raw materials required for battery manufacturing are not evenly spread on the planet, a situation that can cause additional geopolitical tensions. 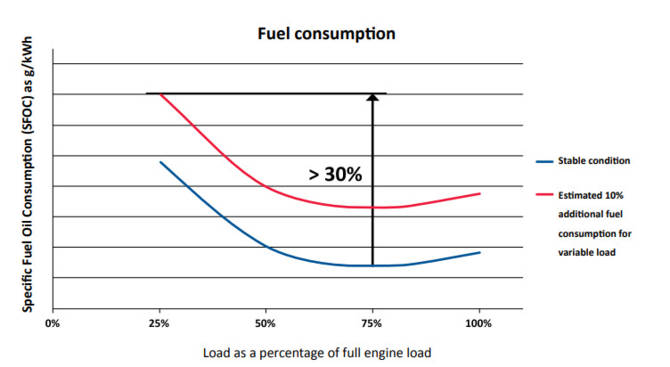 The behavior of combustion engines

The amount of emissions from internal combustion engines are dependent on the burning process, fuel type, and engine load, including whether it is a stable or variable load.

2. Fuel type
The chemical composition of different fuel types results in different emission profiles. For example, sulphur emissions are directly dependent on the amount of sulphur in the fuel. As such, 3,5% S HFO will always produce 35 times more sulphur emissions than 0,1% MGO. Also, CO₂ emissions are dependent on the carbon content and the ratio of carbon (C) and Hydrogen (H) in the fuel. Fuel also contains impurities that reduce the heat value and thus increase the CO₂ to energy ratio.

3. Engine load
The engine load depends on the application, but in the marine world it is traditionally optimized at about 85% load (100% for gas engines with an Otto process). The further you move from this point, the lower the efficiency will be, which means that the fuel consumption i.e. CO₂ will increase per produced kW/h. Furthermore, other types of emissions like NOx, PM, and CH₄ have a tendency to increase more rapidly than the reduction in efficiency when the engine is operated (far) from its optimization point. It needs to be noted that more recently, some engine manufactures have offered more flexibility in selecting an optimization point that is likely to be closer to the actual operating profile, thereby reducing both fuel consumption and emissions.

4. Stable load vs. variable load
It’s well known that combustion engines perform best when operated without any disturbances, on a stable load. However, a wide range of load variations from acceleration and load drops disturbs operation and results not only in lower efficiency, but also remarkably higher air emissions. Black exhaust fumes from cars when accelerating from a stop, or the equally black fumes from vessels when starting or accelerating are familiar sights. The increase in fuel consumption from variable loads is not well documented in the public domain. However, at least a 10% increase in fuel consumption has been measured in dynamic position (DP) operation compared to stable operation.

What can be done to reduce emissions? LNG is the most common alternative fuel today, and possibly the only one available in large enough volumes to fully satisfy marine demand. Is it, therefore, the obvious choice? It depends. Putting abatement technologies aside for this article, the use of LNG is the most widespread method used to cut emissions. It works very well when all four the afore-mentioned emissions-determining factors can be favourably applied.

This favourable condition can be expected in multiengine gas-electric installations with rather stable loads over long periods, such as cruise ships or blue sea merchant ships operating for prolonged times with the same engine load. Under such conditions, methane slip, which is the biggest drawback of low pressure gas engines, also remains at a manageable level. This is demonstrated in Figure 1. On the other hand, if vessel operation means that the engine frequently operates at low or very low loads with a highly variable load demand (e.g. an OSV in DP), The LNG-Otto process combination is hardly environmentally friendly. The efficiency drop in combination with low and variable loads results in excessive methane slip pollution.

There is a strong case for combining battery and combustion solutions, thereby taking advantage of the strengths of both technologies. Batteries produce zero local emissions and are ideal in areas where this is essential. They are most cost efficient if they can be charged and uncharged frequently, and if the size of the battery pack can be kept reasonably small. Internal combustion engines operate best at relatively high loads in stable conditions. Thus, when a ship operates for a prolonged time on a stable load, e.g. during transit in the open sea (or for a car on the highway) the best result is achieved by using the combustion engine and charging the batteries.

When operations result in load variations and/or require one or several engines to operate on very low loads, batteries can be used to balance the load changes and enable the operation of fewer generators. Thus, the remaining generators can operate on higher and more stable loads, resulting in up to 30% enhanced efficiency and lower CO₂ with significantly lower NOx, PM and CH₄ emissions (depending on emission type over 50%). Battery packs dimensioned carefully for this purpose will also be smaller, require fewer rare metals and have the smallest environmental footprint on a life cycle. They will also be cheaper and thus enable electrification for a larger population.

In view of the afore-mentioned points, it is clear that applications for batteries should be selected carefully. Once this is done correctly, and only then, the benefits are undeniable from economy and environmental standpoints alike.