The power of copying – sister project management in CADMATIC

In industrial design projects, copying is an excellent way to achieve more and improve efficiency.

Increasing efficiency and getting the most out of limited resources is an eternal challenge. In industrial design projects, copying is an excellent way to achieve more and improve efficiency. CADMATIC’s sister project management supports parallel work in sister projects with flexible change management.

Copying is widely used in large industrial projects to build factories or ships. Ideally, sister projects should be implemented as they allow leveraging significant amounts of work that was done before; the unknowns are known while the resources, manning and all other operations are understood and balanced.

The time and cost savings associated with sister projects are the major drivers behind their use. The savings make sister projects desirable, but also very challenging. Project size, complexity, financial pressures and strict delivery deadlines contribute to making sister projects a significant challenge.

Efficient change management is a key success factor in sister projects. With multiple sister projects and a longer project timeframe, the challenges increase exponentially. Copying would be easy if the projects involved were identical, but this is rarely the case. Different types of equipment might be chosen to match updated performance specifications while different part suppliers or materials can cause changes in layout and construction requirements. Updated work processes at subcontractors also require updated output documentation.

It is challenging to manage the construction of sister projects in an industry where change is the only constant and design is increasingly complex. Projects commonly follow each other on a continuous production line and schedules usually overlap.

Despite the above-mentioned challenges, the use of sister projects does allow possible design flaws identified on a project to be corrected in the following projects. Better or more cost-efficient solutions may similarly be identified and implemented. Changes in legislation, specifications, or standards may also necessitate changes from project to project.

The simplest possible scenario is when project schedules follow each other with no overlap. In such cases, the design of the parent project can be copied in full to the next project, after which the necessary changes can be made to the copied project. The first project may already be in operational phase, but still require modifications due to problem areas. This, in turn, means that the modifications also need to be made to the ongoing sister projects.

Designing sister projects in a synchronized schedule brings additional savings in time and costs while adding complexity in management. The benefits depend mainly on how well the design phase can manage changes. Without sister project management, the same changes have to be made several times in sister projects.

The benefits of using the sister project concept by CADMATIC:

The designer selects the required to be copied to the target project from the units, or project part that are ready to be duplicated in the source project. The selection of the part of the project can vary from simply picking one module or unit or a compartment, to cherry picking 3D items using a sophisticated query with the use of metadata – such as editing time interval, type of piping or outfitting components, specific system or type of 3D item.

Sister projects are similar, but not identical. When something needs to be changed in the target project, the links to the parts in question are removed, after which target project-specific planning can start for the unlinked parts. Parts and drawings can be copied independently. At the end of the process, unique and up to date 3D models and documentation exist for each project.

Several sister projects can be created from the same parent project, or a sister project can be designated as the source of the following project. Projects can also be combined and different parts from several sources can be copied to one target project. This way, one part of a project can come from the original parent and another from an earlier sister.

It is also possible to visualize differences in projects by loading sister projects to CADMATIC eBrowser to compare the 3D models and meta-data of all 3D parts in the model. 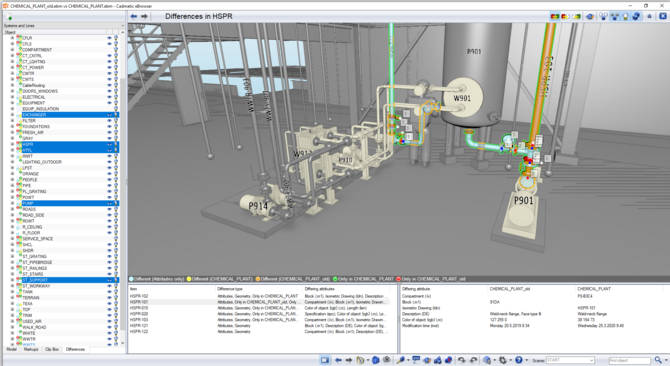 The workflow in CADMATIC sister projects

1. Starting up a project

2. Transferring parts to the target project

After the sister project has been created, the source project administrator uses the flexible standard CADMATIC query tool to pick the required parts from the source project to be transported to the target project. The selected parts can, for example, be all the parts inside a specific space that are part of particular systems. The target project administrator then imports the created transport file. At the same time, the links between source and target parts are created automatically. After this, the parts can be seen in the target project model, but cannot be changed. Documents related to the parts can also not be changed at this stage. The linked non-editable parts can easily be recognized by displaying them in a particular color with the ‘Color by Sister Project Link Status’ command.

3. Making modifications in the target project

The intended workflow supports parallel work in sister projects and provides the required flexibility for managing changes in complex 3D engineering models and in for construction phase of the project.

Read more about sister project management in the CADMATIC documentation portal or read about application areas in your inudstry via the links below.

CADMATIC sister project management provides tools for supporting design work and covering some parts of the traditional PLM part of the shipbuilding process.

Typically, there are two main approaches in the shipbuilding world, so-called CAD-centric and PLM-centric approaches. A hybrid way, supported by CADMATIC’s native tools – sister project management, Web API, global work sharing and information management provides the possibility to select the most suitable strategy for the shipyard, at the same time making use of the full power of copying without compromising complexity for large-scale designs.

For energy and process industry

Reusing experience, 3D models and documentation from previous projects helps to reduce design hours and the needed support from CAD tools. CADMATIC’s flexible approach facilitates the process for users and provides the required tools and the possibility to link with PDM/PLM or ERP systems for efficient execution of EPC projects of any complexity.

The greatest efficiency can be achieved by using 3D plant design tools together with available interfaces and information management.