Intellectual property rights are an important part of the global design and engineering projects.

Simultaneous access to 3D models and the ability to share designs through viewer files are some of the most important features of modern CAD systems. These features are business-driven: organizations often need to outsource parts of design work to niche specialists or make use of the most competitive resources around the world. The implementation of distributed design systems allows these goals to be achieved.

Through sharing 3D models and related data, companies provide access to their most valuable assets. At the same time, they also gain access to external knowledge and expertise. Besides well-known concurrent design tools, most modern CAD software enable work in a distributed environments where participants from different companies and locations have access to the same CAD project data. This process is normally backed up by various legal agreements and contracts, often including a Non-Disclosure Agreement. Are these measures sufficient though, and what role can CAD play in this regard?

It must first be acknowledged that CAD software providers are no longer only suppliers of design tools. They have become deeply embedded in the value created during the life cycle of a design project and beyond: CAD software has evolved into being a hub of knowledge. It stores libraries of parts and fittings according to various standards, in-built design rules and specifications, predefined modules and parts of vessels.

The role of CAD in Marine design projects and asset management is evolving slowly, yet steadily. There is a shift from knowledge facilitation or simple modelling to knowledge sharing, and in this context, also knowledge protection.

Developers of Marine CAD environments have to balance the conflicting needs of facilitating knowledge creation and information sharing and the need to provide IPR protection. Little help is being provided by regulatory frameworks. The EU regulations for IPR in the shipbuilding industry, for example, do not set particular conditions for data sharing within distributed CAD environments. This leaves CAD providers to decide how to ensure customers’ IPRs are protected without damaging the fragile value co-creation process in design and subsequent asset life cycles phases.

Through sharing 3D models and re­lated data, companies provide ac­cess to their most valuable assets.
The first port of call is identifying possible sources of information leaks. The amount of interfaces between software tools has grown strongly in recent years and naturally deserves scrutiny. Traditionally, software vendors have avoided building interfaces to other vendor’s products, precisely as they have tried to avoid disclosing their database structures and providing access to their core data. However, the development of neutral data formats such as IFC, JT or STEP has mitigated these concerns. The interfaces are often separately licensed and can be easily controlled with simple administration settings.

A similar process was seen with mechanical CAD, albeit a significantly simpler one. Mechanical CAD models are “lighter” and do not contain as much topological data as is commonly found in ship design. It is, as such, much easier to integrate Mechanical CAD with PDM/PLM software.

The most common mechanism used to safeguard sensitive information is to restrict access to certain areas or parts of databases. So-called filtered replication provides access control to connected sites.

The main design company in a project, for example, can control what parts of the project are visible to other participants. This process is often complex and requires additional definitions and system setup. However, it could be approached from the designer’s perspective: using 3D spaces to define an area. This approach is familiar from the way a design team’s work is separated. It ensures the integrity of the design by placing the responsibility for each area inside the team and controlling only overlapping areas where all teams are involved. See figure 1.

Business managers and other participants less involved in the core design process commonly make use of 3D viewers to access design features. These files contain a limited amount of data and do not pose a large IPR risk. Design solutions used in particular areas may nevertheless be considered valuable assets to the design company, and should be protected.

A filtered replication process, as described earlier, can be used to restrict the content of viewer files on a particular site only to selected areas. The validity of viewer files can also be restricted to provide an additional security layer. The owners of designs often require access via 3D virtual walk-around during the design and building phases, but wish to restrict access to the entire model after the project is completed to avoid copying of their design solutions. 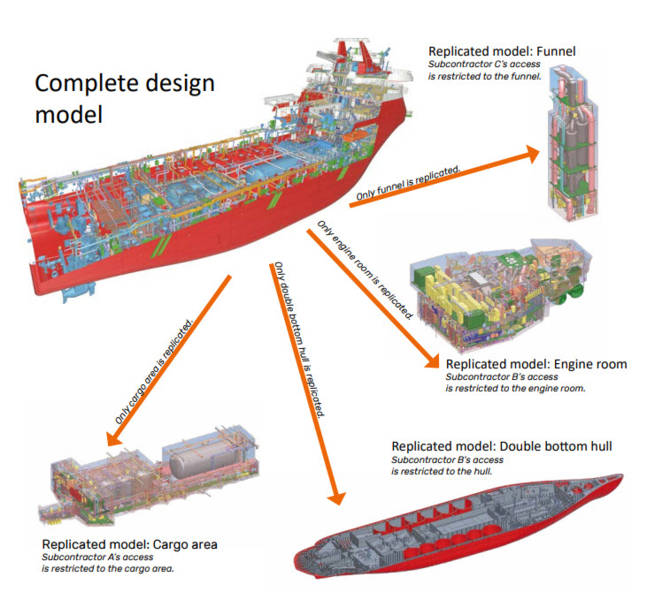 Ensuring the integrity and security of project data at all times receives the utmost priority. In globally distributed projects, data is updated at set intervals between remote design sites via an online network such as a secured internet connection, or by simply exchanging the file in an email attachment.

CADMATIC provides filtered replication to protect intellectual property rights. If a company prefers a subcontractor to only have access to their own parts of the project, it can be implemented without additional licensing or tools. The project replication setup can include a filter for 3D objects via a 3D box based selection. This way, the remote design team only has access to the part of the 3D model needed for their tasks.

With filtered replication, subcontractors have access only to designated areas of the project, and cannot publish viewer models of the whole project. When drawings are created, it is possible to use drawing mask boxes to restrict visibility in drawing views. Objects that are completely inside a mask box are not shown in drawing views. Objects that are partially inside a mask box are clipped in the visualization and the part of the object inside the box is not visible. Expiration dates for viewer files provide the possibility to control access to the design solutions after completion, which ensures that outdated files are not used.

The CADMATIC approach provides all users with an easy-to-set-up replication mechanism without extra modules or fees, as well as effective tools to protect the IPR of 3D designs.

Figure 2. A visual deny box in 3D view for filtered replication in a distributed project.

The increased sharing of data during and after design projects, as well as the growing amount of integrations between software products have enhanced the need for IPR protection. Providing efficient mechanisms to protect IPR within distributed environments and ensuring data filtering according to access rights are non-negotiable.

At CADMATIC, we have developed tools that allow design owners to efficiently control access to their designs and thus protect their most important assets. The use of filtered replication technologies is a core component of the CADMATIC solution.
This article is a shortened version of the paper: ‘Protecting Intellectual Property Rights in Distributed CAD Environments’ by Ludmila Seppälä (MSc, MBA) presented at the 18th International Conference on Computer Applications in Shipbuilding (ICCAS), Singapore, 2017.