Can 3D models replace traditional design drawings? If the question were formulated like this, most people would answer in the affirmative. Several would question whether it has not already been achieved and, if not, that it was only a matter of time.

If the answer to this question is that straightforward and such an obvious direction for the develop­ment, one can only wonder why this change has not happened already. 3D models have been around in shipbuilding for almost 50 years. Has this not been enough time to polish the technology and replace old artefacts, such as 2D drawings?

This article shows that the an­swer is not that simple and does not depend exclusively on techno­logical aspects.

The power of creative destruction and Kondratieff’s waves theory

Kondratieff’s waves theory provides a broad structured view of the his­tory of technological development. Based on the financial data from rolling 10-year returns of Standard & Poor’s top 500 companies, spikes or waves can be observed that match technological changes. Fig­ure 1 presents these waves along a timeline. Behind every signifi­cant upswing in financial returns, which moved societal development forward, there is a considerable step in the use of new technology: steam engines, railways, electricity, automobiles and petrochemicals, and information technology. None of the technologies is an isolat­ed innovation or achievement: it is something that society was able to adapt and use profitably. Technological breakthroughs are tightly linked to societal develop­ment in terms of adaptation and acceptance.

According to Kondratieff’s the­ory, the next and sixth wave of creative disruption will be fueled by intelligent technologies. There are many ongoing discussions in industry about digitalization, digital transformation and digital manu­facturing, industry 4.0 and smart factories, as well as AI and the use of digital twins in production.

Intelligence is a key aspect of the sixth wave and differentiates it from its predecessor, which was based on information technology. One can speculate whether in­telligence means actual AI or the possibility to be not only digital, but also data-driven.

One practical example of this change is the ongoing develop­ment of digital twins. As elaborated by Cabos and Rostok (2018), a dig­ital twin is a digital representation of an object, enriched with behav­ioral models and configurations or conditions. As Hafver, Eldevik and Pedersen (2018) point out, the novelty of digital twins is not the existence and use of 3D models as assets, but how these models are bundled.

Deep transitions theory and evolution of CAD as innovation

According to the theory of deep transitions developed by Schot and Kanger (2018), there are more details inside each wave as it can be split more accurately into approximately 50-year cycles. An interesting result can be observed if this theory is applied to changes in shipbuilding. Figure 2 illustrates the main tech­nological changes and innovations concerning deep transitions.

The era of IT in shipbuilding aligns with the beginning of com­mercialized use of CAD systems. Triggered by IT advancements, CAD evolved in the early 1970s from an innovation into something that became a common and essential part of shipbuilding projects. It took about 50 years for the technology to mature, for the newest hard­ware to be taken into use and for it to be fully accepted practice. In turn, the increased accuracy of de­sign allowed even larger and more complex projects to be handled, a development that took shipbuild­ing to an entirely new level. The innovation served the industry and changed it. It was, however, not an isolated phenomenon. It was made possible by societal developments that required a large number of cargo ships and other types of vessels for global trade. As such, the context of innovation plays an essential role in the transition. 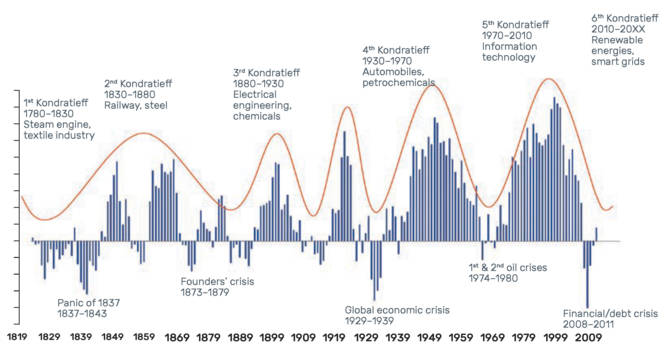 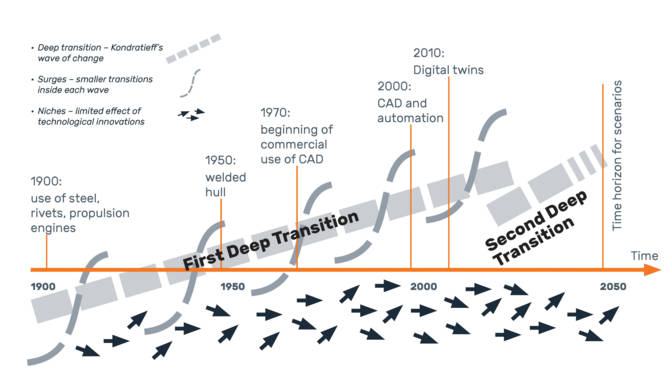 The Multi-Level Perspective (MLP) framework is useful in under­standing how a transition occurs and what makes it possible for an innovation to become viable and widely used.The multi-level perspective ap­proach was originally developed by Frank Geels to explain socio-tech­nological transitions, with a focus on sustainability. It presents a transition process in the context of three main layers: landscape, re­gime, and niche. The landscape layer represents the most stable structure – the existing state of things; it is a mix­ture of the political and economic landscape, the historically and socially stable way of doing things, and time-proofed technology that has been in use for a long time. The regime layer is more dynamic and consists of existing practices and the ways of process organiza­tion. Niches are the most dynamic places for incubation of new ideas and practices. Presumably, niches appear and frequently disappear, often having little impact on the system. However, when there is pressure from the landscape, the regime level has cracks and open­ings, creating space for the niche to enter the regime level and reshape it. “Niche-innovations may break through more widely if external landscape developments create pressures on the regime that lead to cracks, tensions and windows of opportunity” (Geels, 2010). The tension, caused by global­ization and the development of IT technologies, such as increased computing power and graphics cards, created a “window of op­portunity” and allowed CAD to progress to regime and landscape levels. A side effect of the transition was that CAD providers became significant players in the maritime industry.

Next wave of intelligent technologies

The intelligence of IT allows the provision of data in digital format that is suitable for production. For example, based on the data col­lected by CADMATIC, when the first 3D viewer, eBrowser, was intro­duced on the market in 2000, the direct estimation from shipyards was that they were able to reduce the number of drawings needed for production by 30%. The 3D model became accessible not only to CAD users – typically designers in the office – but also to production staff. It also did not require any special skills or training to use. It provided a powerful push to reduce the number of drawings. Howev­er, there are still cases when the amount and types of production drawings are justified by tradition and processes at a shipyard, and less by the practical need for these drawings in production.

It is not about the IT anymore, but about the intelligence behind the data

Following this development, after introducing CADMATIC’s eShare as a central portal for all interlinked project information, a further re­duction of 70% of drawings was achieved. This is only one example where increased intelligence in IT technology significantly affected the number and types of drawings involved in production but was capped by societal readiness to change the existing regime. Pio­neering yards, focused on innova­tion and effectiveness, were more ready to make the change than yards where tradition and main­taining the status quo were stron­ger driving forces. The human and societal factors conflict with tech­nological possibilities in this case.

The level of automation is a key dimension in the discussion about automated production. There are many possibilities to automate pro­duction: steel cutting and bending, welding robotics, 3D printing, and automatic adjustments for work­shop flows based on data analy­sis. Together with developments in robotics, this has become an essential factor for ship manufac­turing. The cost of machinery and implementation has been a holding element in this regard.

The future of drawingless production

Figure 3 illustrates four main pos­sible scenarios for the future of drawingless production. They are based on a division of high to low levels of IT intelligence and auto­mation. Two stereotypical scenari­os present “business as usual” and “high hopes for change” possibil­ities. The other two illustrate con­flicting trends and tensions in the landscape that provide opportuni­ties for innovations to grow.

While all four scenarios are pos­sible, the continuous growth sce­nario is perhaps preferable, if one wants to be optimistic and disre­gard natural developmental limita­tions. A combination of scenarios for transformation and robotics would present a somewhat realistic picture in the medium-long per­spective. In both cases, the gradual elimination of drawings in the pro­duction process is a likely outcome.

Considering the main driver of intelligent IT, drawings are already being gradually substituted with 3D viewers and with direct data transfer to production or manufac­turing control systems. CAD plays a key role in the substitution pro­cess by providing interactivity with data and faster access to it within change management.

Originally, input to CAD was provided by users. This is slowly changing, however, towards the use of embedded design rules and the substitution of direct param­eter inputs with inputs based on analysis or AI.

Interaction with data distinc­tively differentiates the digital era. The first attempts to standardize drawings aimed to improve read­ability and production quality. For the data-native generation, this poses unnatural limitations. In­stead of a static snapshot, people prefer to obtain data on demand, and then manipulate it.

The following use case illus­trates this process. Traditionally, many drawings in shipbuilding come from piping production data or spool drawings. Estimations are that a big cruise liner, of about 350m, has about 10,000 spools. With current practices, these draw­ings are automatically generated and annotated. However, about 5% (with effective use of CAD and set­tings matching production needs) require manual work.

The process itself is quite labo­rious and time-consuming. How­ever, the main culprit is the use of these drawings in production. Every drawing must be manually examined and used as an instruc­tion to manufacture a piece of pipe and often the data provided on the drawing is not sufficient or outdat­ed due to changes in design by the time it reaches the workshop. The possibility to generate and visualize production data at any time would remove the disconnect between design and manufacturing.

As a practical example of such developments, some CADMATIC customers already use provide an online connection to design data in the production workshop and display the data in 3D viewers with annotated models. Alternatively, they use AR with HoloLens or VR interfaces directly with the 3D model.

The foundational technologies for drawingless production are set and the direction is well-defined. The question remains whether the window of tension is enough for the innovations to progress, spread and become part of the regime.

Figure 3. Future scenarios of drawingless production in digital and data-driven shipbuilding towards 2050.