Does one ship pollute as much as 50 million cars?

An eye-catching headline that has done the rounds in LinkedIn’s marine community suggested that one ship emits as much sulphur as 50 million cars. Another frequently seen statement is that the sixteen worst offending vessels create as much pollution as all the cars on the planet combined. Can this really be true? Was shipping not supposed to be the most environmentally friendly mode of transportation out there?

When I read the article, I felt a strong desire to open Excel and run a few simulations of my own on the topic. Before that, some research about the article and the boundary conditions was required. The original source was an article published in the China Daily Asia on 20 May 2016, titled “Ship emissions choking the region”.

The article claimed that “Cargo ships typically use highly polluting bunker fuel, which is comprised of around 3 % sulphur – much higher than ultra-low sulphur diesel. One large container ship at sea emits the same amount of sulphur oxide gases as 50 million diesel-burning cars.”
In order to reproduce the figures I used a large modern 14,000 TEU container vessel and compared it with a 2017 Ford Focus diesel. The parameters used in the calculation are presented in Table 1. With these boundary conditions, the result is very close to the original statement in the article and any discrepancies can easy be explained.

The result of the calculations indicates that the vessel actually emits sulphur emissions equal to that produced by 59 million new diesel cars. The difference compared to the claims in the China Daily Asia article can be explained by the used engine power, efficiency and daily utilisation.

The original assumptions contained some flaws. The next step, therefore, was to adjust the figures to better reflect the situation today.

First, the vessel speed was reduced from approx. 23,5 knots to approximately 18,5 knots. By doing this the main engine load was decreased from around 75 % to 40 %. The amount of sulphur in the HFO was also reduced to 2,45 % to better mirror the world average for 2015.

Also, specific fuel consumption had to be increased for the main engine by 7 % and the auxiliary engine by 5 %. This was done to reflect the tolerances provided by engine manufactures. At the same time, an increase in the vehicle’s fuel consumption to 7.1 l/100 km was included. This was the consumption figure displayed by a car used on the day of doing the calculations. The car was admittedly not a new Ford Focus with a diesel engine, but is still an average-sized car with a moderate-sized engine and thus reflects the existing fleet in a balanced way. All the changes are shown in Table 2.

After all the modifications were introduced the result indicated that one large container vessel in the open sea emits as much sulphur as about 19 million cars in city traffic. 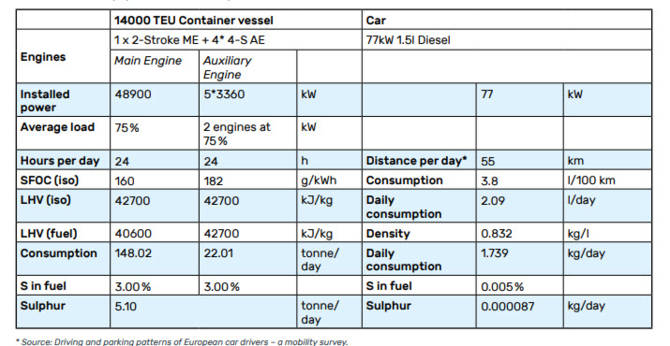 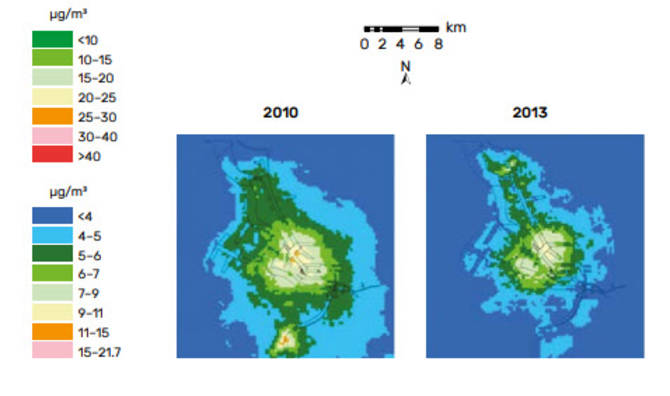 Picture 1. Annual average SO₂ concentration in the port of Antwerp in 2000, 2004, 2010 and 2013. The level of SO₂ concentration in the port and city declined so dramatically that the map colour key had to be changed from 2010 onwards (on the right) to allow for SO₂ levels below 10 μg/m3. In order to allow a meaningful comparison, the 2010 and 2013 maps from the Flemish Environment Company were redrawn (right) according to the 2000 and 2004 map key for this publication.

Table 3. Operating profile and emissions during one port stay

Does it really matter?

This begs the question whether these figures are relevant? Does it matter whether one ship emits as much sulphur as 59 million or 19 million cars? The answer is no.

Firstly, in 2017 China will adopt new emissions regulations for on-road fuels, which are the same as those governing EU road traffic. This will cut the amount of sulphur emissions by cars from 50 to 10 ppm, which will result in a five-fold increase in the number of cars to one ship ratio, from almost 19 million to 93 million. Furthermore, in countries like Germany and Sweden the sulphur rate in diesel is typically 2–3 ppm, which would further double the number of cars to approximately 185 million.

At this point we should remember our maths lessons from school. While the numerator is greater than zero and the denominator is approaching zero, the sum approaches infinity. This indicates how different results can be achieved by selecting different, yet correct input values.

So what would be a better way to compare emissions and decide on the required actions? Rather than trying to achieve results that have more shock value than relevance, the focus should be on emissions that have the largest impact on air quality and human health. Only after this can one make meaningful conclusions.

The challenge with SOx emissions is to get a clear picture of how local the emissions are. While it is known that SOx emissions can travel in the air over great distances, the majority of SOx emissions from a vessel’s exhaust is emitted in the form of SO₂ , which has a rather short lifespan. On the other hand, part of the SO₂ emissions is transformed into SO₄, which remains in the atmosphere for longer periods. It is also known that SOx contributes to particulate matter (PM), which is a great health concern. Local wind and weather conditions also play an important role in dispersion. Data from the Port of Antwerp’s 2015 sustainability report can be used to reach a conclusion in this regard.

Measurements in the port region indicate that increased concentrations of SO₂ are rapidly diluted. After 10–20 nautical miles the concentration of SO₂ drops to less than one third of the original concentration. Thus, while fighting air quality issues over populated areas and especially in harbour cities, the focus should be on the last two hours of the voyage before the harbour call, the harbour stay itself, and the first two hours after departure.

As the majority of emissions originate while vessels are berthed in harbours, it is both easy to pinpoint the problem and take corrective actions.
When the same container vessel makes a harbour call according to the profile in Table 3, the greatest contribution by far to SOx is from the port stay itself. It not only accounts for more than 70 % of the emissions, but is also where the emissions are closest to the populated area and therefore have the greatest impact on city air quality.

The fact that the majority of emissions originate while vessels are berthed in harbours, makes it not only easy to pinpoint the problem, but also easy to take corrective actions. The EU’s 0.1 % sulphur in fuel requirement while berthing in European harbours is a very powerful and simple tool to dramatically reduce sulphur emissions. The process is fairly simple as only vessels’ auxiliary engines need to switch fuel. The result of the reduced sulphur amount in fuel at the port of Antwerp between 2000 and 2013 is clearly visible in Picture 1.

Nitrogen oxide (NOx) emissions were not included in the example calculations, but one can nevertheless conclude that NOx emissions will behave similarly to SOx emissions. Most emissions that reach harbour areas are from the last few hours of trade and during harbour stays, where the majority of emissions originate from the auxiliary engines.

It would, thus, be a logic step to implement lower NOx level limits (e.g. IMO Tier 3) while a vessel is in port. It would be technically feasible to implement in the form of NOx reducers or catalysts for medium speed engines. These are proven technologies that are rather compact and affordable. When SOx and NOx are heavily reduced PM is similarly decreased.

Other options would be to shift to fuels that are totally or almost sulphur-free, such as LNG, methanol or ethane, all used today to different degrees in shipping, or to shift to shore power. All of these alternatives would reduce SOx, NOx and PM. As with other measures, focusing efforts on harbour stays alone minimises the associated costs and technology challenges.

There are several proven methods available to dramatically cut sulphur emissions in locations where the impact on air quality and human health is most significant. By directing emissions reduction activities and measures at the most critical areas, the best input/output ratio for efforts and their associated costs can be achieved.

Read more about how CADMATIC's ship design solutions can take your efficiency to new levels.