Augmented reality with eShare for HoloLens

Behind the scenes of AR technology application in design review

AR solutions open the door to challenging traditional design limits and truly awaken the imagination. New technologies are coming onto the market more quickly and conveniently than before. Trying these new technologies and selecting those viable for implementation are part of everyday business at CADMATIC. This article follows the development of AR technology and its application in CADMATIC, culminating in the launch of eShare for HoloLens.

The launching of the first version of Microsoft HoloLens in early 2016 proved to be the point where augmented reality technology seemed mature enough to convince CADMATIC developers to try it themselves. At the time, purchasing MS HoloLens was no easy task. 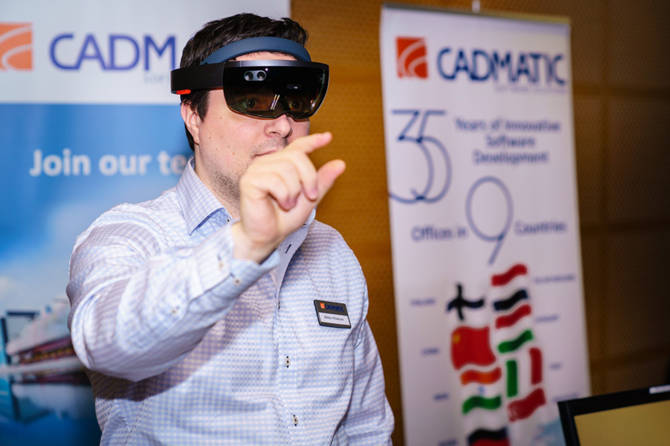 “Ordering the first headset in any of the countries where we have offices proved to be impossible, or at least extremely complicated. Eventually, we managed to order it from Ireland directly from Microsoft. We wanted to see how it would fit with our information management products and how it could possibly expand the design tools and techniques,” says Mikko Yllikäinen, Product Owner, Information Management Applications. 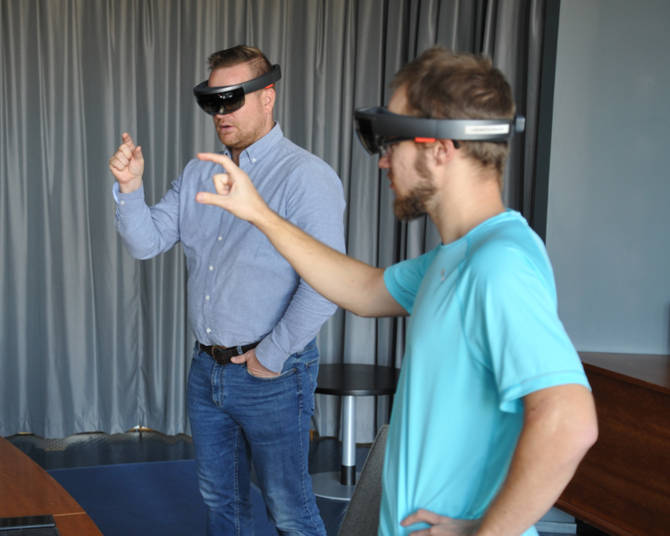 The CADMATIC product creation team started experimenting with HoloLens as soon as the package arrived at the office, but the actual development had taken its first steps already before that: They had a prototype version that allowed users to see a 3D model in AR.

“Almost everybody in the office wanted to try HoloLens during the first couple of days. The technology was still very much state-of-the-art, despite the availability of several similar cheaper devices. It was funny to see people walking in the corridor wearing a headset and not responding immediately to others,” Mikko describes the first days after the arrival of HoloLens. 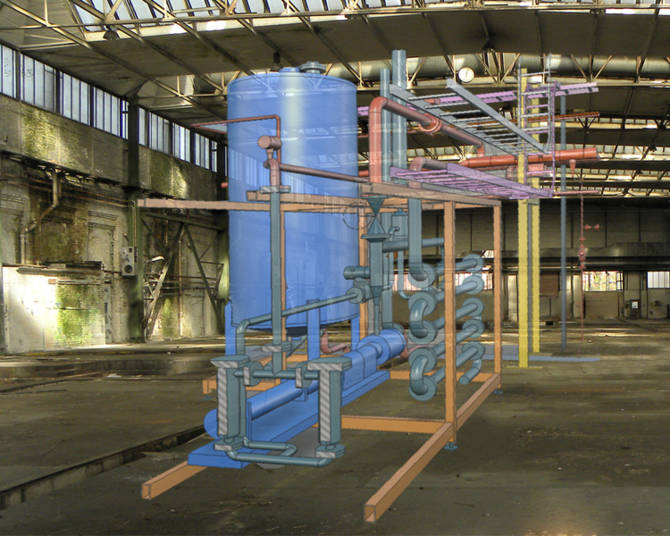 In augmented reality, the headset projects computer-rendered 3D holograms into the user’s view, but the users are still able to see their real environment, whereas virtual reality headsets show a 360-degree view of computer-generated content. The holograms hold their position as the user moves around them.

In the beginning, the development team had a long list of ideas how CAD models could be utilized with the headset. They held many discussions with clients about the technology and development possibilities were considered before the scope was limited to a manageable size.

It became clear that the first priority was uploading 3D models to HoloLens and the need for basic review functions. These included getting object attributes, measuring distances and aligning digital models with real objects, i.e. taking 3D models to AR and keeping information already available on top of the 3D geometry. The most suitable platform for this proved to be an eShare server, where all the project data is connected centrally.

“We wanted to present the new developments at the bi-annual Users' Meeting in September 2018. Firstly, to share our excitement with our customers, and secondly to discuss possible use cases. This posed some time constraints to get it ready and published to the Windows Store. Prior to the event, we had several use cases in mind that are typical for reviewing 3D models of new and revamp design projects. We already have significant expertise in our company to create and use 3D data for various purposes. All we needed to do was to extend our imagination with the possibility to see the 3D model in its real size and in a real environment, not on a screen,” Mikko Yllikäinen describes the development leading up to the UM 2018.

The team noticed that HoloLens immediately changes the perception of 3D and space. For example, one part of a test model with a platform with some piping may seem like a small piece in a design application and eBrowser, but once loaded in HoloLens it was far too big for the spacious office corridor.

The whole idea of modeling, originally based on the “eye to hand to brain” concept, changes with HoloLens.

“When you see the actual scale of the design in a live environment it boosts your imagination. It lets you experience changes the project is about to bring,” says Mikko.

The team presented the new HoloLens application in workshops at the UM 2018. The immediate feedback was very positive.

“It was great to see how excited people were. The feedback we collected provided us with even more inspiration to continue. The possible use cases raised during the discussion varied from possibilities to use the product for design reviews, show designs to stakeholders, involve people in remote locations, building process controls and simulations, replacing small scale laser scanner use, all the way up to abandoning the use of paper drawings, as well as installation and production instructions,” says Mikko. 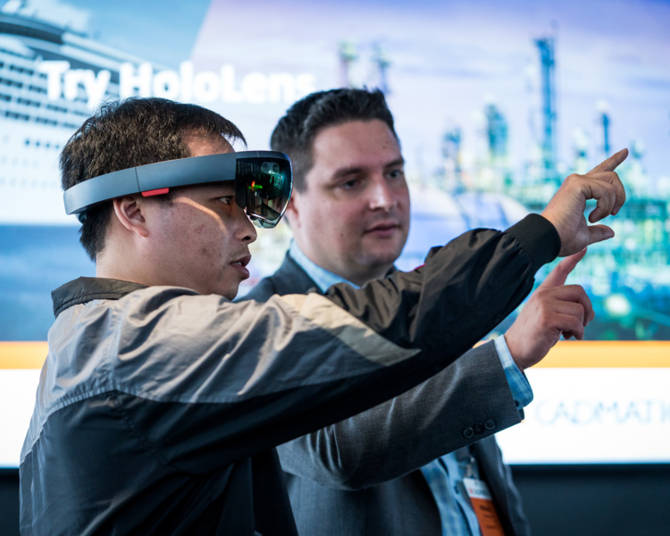 Mikko Yllikäinen shows a customer at the 2018 Users’ Meeting how 3D object data can be viewed.

Even the most experienced designers like to see projects in the building stage, to get a real feel of what is being designed. It allows the designer to experience the actual environment and to notice mismatches, impossible designs or ergonomical issues. All of this is now possible without costly and often impossible trips to construction sites. A new project can be reviewed and presented in the most realistic way to stakeholders even before it is approved or constructed.

AR technologies are currently not the core focus of CADMATIC’s development plans. The development adheres to agile principles, however, and the development team always keeps looking for new ways to provide benefits to customers.

“We focus on solutions to design projects and enable building and production in the most cost-efficient way. Extending the limits of traditional design solutions with information management platforms where all project-related data can be connected, allows our customers to save time. It ensures the availability of data that is structured in a natural way with the 3D model as the hub. It also helps customers to eliminate costly design mistakes,” Mikko Yllikäinen explains the development focus. 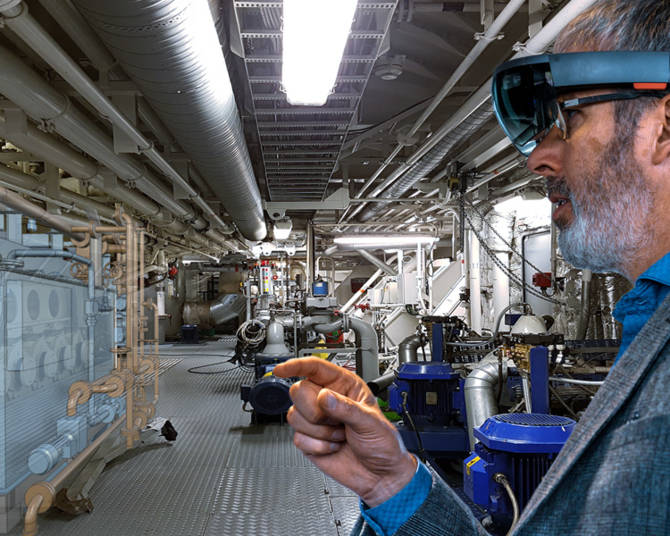 AR solutions open the door to challenging traditional design limits and truly awaken the imagination. New technologies are coming onto the market more quickly and conveniently than before. Trying these new technologies and selecting those viable for implementation are part of everyday business at CADMATIC.

“As an innovative company we try to remain at the cutting edge with new hardware, new coding libraries and smart and enthusiastic people – it’s all part of the CADMATIC culture. We embrace young talents as the company rapidly grows and experiments with the latest technologies to see what best fits our goal of serving our customers and remaining the most innovative CAD provider out there,” Mikko concludes.

MORE INFORMATION ABOUT ESHARE FOR HOLOLENS