“We are very impressed with the way CADMATIC handles scans and we think that it is an extremely useful tool. Importing scans into CADMATIC is fast, efficient and we do not lose quality." – Ashley D. Vetter, Diagram Lead and Administrator

Learn how to efficiently combine point clouds with 3D models – Contact us.

Glosten, located in Seattle, Washington and Providence, Rhode Island has used CADMATIC Marine software for several years now. After some detailed demonstrations in 2014, Glosten decided to start using CADMATIC software, mainly because they were impressed with CADMATIC’s ability to quickly build and process models for new projects and because of its early collision detection. Since then, Glosten has successfully used CADMATIC software on a wide range of design projects.

In 2014, Glosten was just scratching the surface of CADMATIC’s capabilities. The team at Glosten could clearly see that CADMATIC provided several advantages over other software products on the market. They recognized that it would allow them to stand out from their competition.

Ashley D. Vetter, who has been a production engineer at Glosten for seven years, thinks CADMATIC has many benefits, but highlights two key advantages:

With a fully equipped, 85-meter passenger ferry project, CADMATIC proved to Glosten that it can process and handle very large models quickly. Ashley indicates that she thinks CADMATIC has been designed around 3D and piping systems, in contrast with other software packages.

One example is the scroll button on the mouse that can be used to 3D-rotate a view, a feature that is not used by other software packages and is a real plus at Glosten.

“We are often asked to place a piece of equipment in a space to ensure it fits in the environment. This 3D thinking helps us find potential conflicts in the design before they occur. This shift in thinking was accelerated by using CADMATIC.”

In CADMATIC, many processes are automated and many functions increase both productivity and the reliability of results. Glosten worked on a refrigeration refit project for a 112-meter factory fish processor. Only pipe runs that were 75 mm. in diameter and larger required routing. With the diagram received, all other runs had to be filtered out. However, Glosten chose to do it differently and created a new process in CADMATIC Diagram with a much simpler diagram that is linked with Plant Modeller. Thereafter, the modeling and reviewing processes were done in Plant Modeller.

The Glosten team’s favorite feature is updating drawings, spools and annotations based on model changes. It saves them from having to do rework on drawings.

CADMATIC was used for the midlife refit of three global class research vessels of the US Academic Research Fleet. The US Navy AGOR-23 class vessels have all passed the midpoint of their service lives.

The engineering and design for three of the vessels has been completed. The projects entail a lot – repowering, replacement, refurbishment of shipboard equipment and replacement of technically obsolete shipboard machinery etc.

The project started with Glosten 3D scanning the vessel with an infrared laser scanner. Thereafter, the laser scans where imported into CADMATIC eBrowser and Plant Modeller using the Laser Scan Modeller. eBrowser was used to visualize the location of the current systems. The scans loaded into Plant Modeller were used to create new system diagrams and recreated the structure and equipment/piping remaining in the vessel in the Diagram module. Finally, Plant Modeller was used to do routing in the space available, making use of the supporting link between Diagram and Plant Modeler to guide modelling.

Since Glosten has seen a big increase in refit work, they are very keen on the Laser Scan Modeller. It is used frequently and they have gained good experience in its use.

“We are very impressed with the way CADMATIC handles scans and we think that it is an extremely useful tool. Importing scans into CADMATIC is fast, efficient and we do not lose quality. We all think that the scans look great as well. Jumping into bubble views to get a clearer view of the surroundings is a nice addition too. The ability to route pipes based on the point clouds helps to remove some of the guesswork when determining the sizes of existing pipes,” Ashley explains.

“CADMATIC has enhanced our ability to produce excellent design work. Because CADMATIC is responsive to feedback and constantly seeking to advance the software with new improvements and features, we recommend CADMATIC to all our clients and partners,” Ashley D. Vetter.

In 2022, Glosten implemented CADMATIC Electrical after a rigorous evaluation process and comparison with competitor offerings.

According to Adam Brown, Marine Mechanical and Electrical Engineer at Glosten, vessel electrical systems are getting more complex and require an integrated software package that can help maintain information and make sure parts and cables get updated throughout design deliverables when there are changes.

"Electrical one line and cable block diagram drawings can include hundreds or even thousands of cables; using basic AutoCAD® would result in major data management problems when equipment and cables appeared on multiple drawings," says Adam.

Some of the key features Glosten considered when evaluating the different electrical design software packages were database backends, project setup times, ease of use, functionality, and integration with other software packages.

"After trying out several software packages, we chose CADMATIC Electrical. It proved to be quick for users to get up to speed with and create their first drawing, and we really liked the integration with other CADMATIC software packages like Diagram and Plant Modeler. In addition, we have had good experiences working with the CADMATIC support and sales teams. Outstanding software support was one of the primary reasons we chose CADMATIC Electrical," Adam explains.

Glosten have wrapped up their initial training and have started using CADMATIC Electrical on two projects. This will allow them to conduct further assessment and also identify best practices for using the software for different tasks within the Glosten design process. 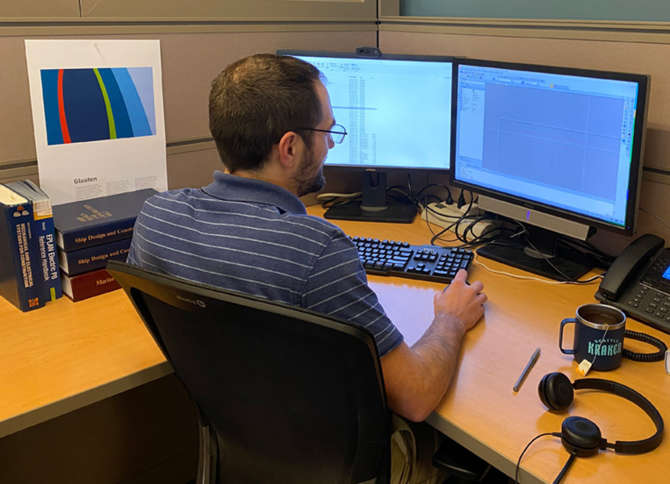 Adam Brown says the ability to import cables directly from CADMATIC Electrical will allow for additional design checks, improving the accuracy and quality of deliverables while providing substantial time savings throughout the design process.

Read how seamlessly and efficiently you can use laser-scanned point clouds in your retrofit projects. Read more about how CADMATIC Electrical can be applied in your ship design projects.